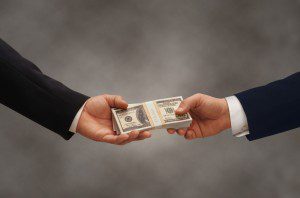 (February 1, 2017) –  The Consumer Financial Protection Bureau (CFPB) on Tuesday took action against Prospect Mortgage, LLC, a major mortgage lender, for paying illegal kickbacks for mortgage business referrals. The CFPB also took action against two real estate brokers and a mortgage servicer that took illegal kickbacks from Prospect. Under the terms of the action announced today, Prospect will pay a $3.5 million civil penalty for its illegal conduct, and the real estate brokers and servicer will pay a combined $495,000 in consumer relief, repayment of ill-gotten gains, and penalties.

“Today’s action sends a clear message that it is illegal to make or accept payments for mortgage referrals,” said CFPB Director Richard Cordray. “We will hold both sides of these improper arrangements accountable for breaking the law, which skews the real estate market to the disadvantage of consumers and honest businesses.”

Prospect Mortgage, LLC, headquartered in Sherman Oaks, Calif., is one of the largest independent retail mortgage lenders in the United States, with nearly 100 branches nationwide. RGC Services, Inc., (doing business as ReMax Gold Coast), based in Ventura, Calif., and Willamette Legacy, LLC, (doing business as Keller Williams Mid-Willamette), based in Corvallis, Ore., are two of more than 100 real estate brokers with which Prospect had improper arrangements. Planet Home Lending, LLC is a mortgage servicer headquartered in Meriden, Conn., that referred consumers to Prospect Mortgage and accepted fees in return.

The CFPB is responsible for enforcing the Real Estate Settlement Procedures Act, which was enacted in 1974 as a response to abuses in the real estate settlement process. A primary purpose of the law is to eliminate kickbacks or referral fees that tend to increase unnecessarily the costs of certain settlement services. The law covers any service provided in connection with a real estate settlement, such as title insurance, appraisals, inspections, and loan origination.

Prospect Mortgage offers a range of mortgages to consumers, including conventional, FHA, and VA loans. From at least 2011 through 2016, Prospect Mortgage used a variety of schemes to pay kickbacks for referrals of mortgage business in violation of the Real Estate Settlement Procedures Act. For example, Prospect established marketing services agreements with companies, which were framed as payments for advertising or promotional services, but in this case actually served to disguise payments for referrals. Specifically, the CFPB found that Prospect Mortgage:

Under the consent order issued today, Prospect will pay $3.5 million to the CFPB’s Civil Penalty Fund for its illegal kickback schemes. The company is prohibited from future violations of the Real Estate Settlement Procedures Act, will not pay for referrals, and will not enter into any agreements with settlement service providers to endorse the use of their services.

The consent order filed against Prospect Mortgage is available at: http://files.consumerfinance.gov/f/documents/201701_cfpb_ProspectMortgage-consent-order.pdf

ReMax Gold Coast and Keller Williams Mid-Willamette are real estate brokers that work with consumers seeking to buy or sell real estate. Brokers or agents often make recommendations to their clients for various services, such as mortgage lending, title insurance, or home inspectors. Among other things, the Real Estate Settlement Procedures Act prohibits brokers and agents from exploiting consumers’ reliance on these recommendations by accepting payments or kickbacks in return for referrals to particular service providers.

Under the consent orders filed today, both companies are prohibited from violating the Real Estate Settlement Procedures Act, will not pay or accept payment for referrals, and will not enter into any agreements with settlement service providers to endorse the use of their services. ReMax Gold Coast will pay $50,000 in civil money penalties, and Keller Williams Mid-Willamette will pay $145,000 in disgorgement and $35,000 in penalties.

The consent order filed against ReMax Gold Coast is available at: http://files.consumerfinance.gov/f/documents/201701_cfpb_RGCServices-consent-order.pdf

Under the consent order filed against Planet Home Lending, the company will directly pay harmed consumers a total of $265,000 in redress. The company is also prohibited from violating the Fair Credit Reporting Act and the Real Estate Settlement Procedures Act, will not pay or accept payment for referrals, and will not enter into any agreements with settlement service providers to endorse the use of their services.

The consent order filed against Planet Home Lending is available at: http://files.consumerfinance.gov/f/documents/201701_cfpb_PlanetHomeLending-consent-order.pdf