(Jeff Sorg, OnlineEd) – In the real estate transaction the contingency is one of the most powerful tools available to the real estate broker. When properly drafted, a contingency protects the client by allowing for the necessary time to obtain needed information or for a crucial event to occur before becoming obligated to close the transaction. Before we get started, let’s take a look at some definitions. 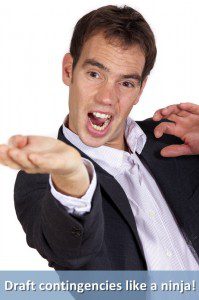 A contingency is an event that may occur. It is a future event or circumstance that might occur, but is not certain to occur. A contingency used in a real estate contract is a clause designed to protect a party to the contract, usually the buyer or seller.

A contingency clause defines a condition or action to be met in order for a real estate contract to remain binding and continue toward closing. A contingency becomes part of the real estate sale agreement when the buyer and seller sign the contract for purchase and sale.

Contingencies prevent contract provisions from becoming affirmative duties until the happening of the event or condition defined by the contingency. When a contingency becomes an affirmative duty, it is said to have ripened. Whether a condition is satisfied and ripens is an important concept to understand when drafting contingencies. For example, when a contingency does ripen, non-performance of the contract might represent either total or partial breach. If it does NOT ripen, the contingency may allow the benefiting party to cancel the contract without further performance and without being in contract breach.

The effect of the occurrence of a condition is to ripen the duty it qualifies – the duty is qualified by the specific event that is to occur. Once the event occurs, the duty of the party will become an affirmative duty and require further contract performance. If the party does not perform after becoming obligated, there is a contract breach. When the condition qualified by the contingency fails to occur, there is no ripening of the qualified duty, further contract performance is not required, and there is no contract breach.

A well-written contingency is one of the most powerful tools a real estate agent has at their disposal to protect their client. When properly drafted, a contingency will relieve the benefiting party of any obligation to perform the balance of the purchase contract without committing a contract breach.

Because the buyer will usually require information regarding the condition of a property, along with time to qualify for financing and to obtain an appraisal, contingencies are usually included to benefit the buyer. When properly drafted, these contingencies allow the buyer or a third party the necessary time to investigate any matters or concerns before becoming obligated to the balance of the contract.

Ideally, sellers and their agents prefer offers without any contingencies for the benefit of a buyer. However, this usually isn’t the case and most transactions will contain contingencies for the buyer to obtain financing, the house to appraise for at least the purchase price, and a due diligence period for inspections and other investigations the buyer wants completed before becoming obligated.

As a rule of contract interpretation, the buyer or seller may claim the benefit of a contingency, regardless of who included the contingency in the contract. This means absent any clause allowing only one party to waive, satisfy, or remove a contingency, both parties are required to waive it. When drafting a contingency, it is important to include who (the buyer, the seller, or both) has the right of waiver, satisfaction, or removal.

In both of these examples, assume seven days pass with the buyer remaining silent. In the first example, the buyer is approving the inspection report and waiving the contingency and the buyer’s duty to perform the rest of the contract ripens into an affirmative obligation. In the second example, the buyer is not approving the inspection report and both buyer and seller are discharged from further contract performance.

Time: The element of time is an important part of a contingency because it is a limiting factor of the contingency. This means that the occurrence or non-occurrence of the specified event must happen by a date certain, such as August 15, or within a certain period, such as 30-calendar days.

Generally, time is material. This means occurrence or non-occurrence of the event within the specified time limit or on or before a date certain will influence the ripening of the underlying duty to perform the rest of the contract. Time is material the following situations:

The courts have categorized satisfaction in two ways:

These two standards lead to different results. Under the first standard, based upon the personal fancy standard, the decision relating to satisfaction is absolute, so long as the decision is made in good faith. Generally, this standard applies in situations where the condition is purely personal.

To clarify intent , when a contingency is based on the personal fancy standard it should be stated as such using as much clarity as possible.

Absent the personal fancy clause in the contingency, the reasonable person standard applies.

OnlineEd is a provider of pre-licensing, post-licensing, and continuing education for real estate licensees. For more information about OnlineEd, please visit www.OnlineEd.com.