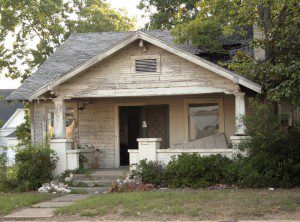 (Joseph Mikkelson, OnlineEd) Zombies have been enjoying a renaissance as of late. Ever since George Romero’s 1968 film, “Night of the Living Dead,” zombies have maintained a steady presence in the media. However, one doesn’t have to look far to see that their popularity has risen to new heights in recent years. Zombies are represented in the theater, on TV, in adventure 5K races, and now in . . . real estate?

With the flood of foreclosed homes in 2008, many banks found that many low-value properties simply weren’t worth the cost to repair the home, and opted not to complete the foreclosure. Zombie foreclosures are properties that have had foreclosure proceedings initiated and have been vacated by the owners, but have not yet been reclaimed by banks. The owner of the foreclosed home may have been long gone, only to find out years later that he or she technically still owns the home and may owe thousands.

The walking dead these properties may not be, but they still pose a threat to borrowers. The CFPB aims to help bring these zombie properties back to life.

“The CFPB is beginning to look very closely at abandoned properties and zombie foreclosures. There is direct borrower harm if a borrower believes a foreclosure on their property has been conducted and they are no longer responsible, and months or years later find out that they are, that there was never a foreclosure and they have large financial responsibilities that they never knew about.” – Laurie Maggiano, CFPB servicing and secondary markets program manager

[ezcol_2third]Servicers typically send dozens of letters and calls to defaulted homeowners notifying them that their home is going into foreclosure, but usually don’t communicate nearly as well, if at all, when the foreclosure is stalled. The CFPB found it was “extremely common” for servicers to charge off low-balance loans and not notify borrowers or municipalities if they did not take title to the property. Consequently, borrowers had no idea that they were still on the hook for continuing to pay not only the mortgage debt, but code violations, municipal services, taxes and upkeep as well.[/ezcol_2third] [ezcol_1third_end]

The CFPB indicated that consumers had repeatedly asked the agency for help, saying the servicers were not complying with disclosure requirements. The agency has joined a task force to identify the estimated 152,000 zombie properties. It intends to help resolve the problem by creating a national definition of “abandonment,” which will accelerate the foreclosure process, making vacant homes available for transfer to potential owners, as well as creating a national registry of these zombie properties.

This article was published on March 14, 2014. All information contained in this posting is deemed correct and current as of this date, but is not guaranteed by the author. Due to the fluid nature of the subject matter, regulations, requirements, laws, prices and all other information may or may not be correct in the future and should be verified if cited, shared or otherwise republished.