“Consumer complaints have become central to the work of this agency. They enable us to listen to, and amplify, the concerns of any American who wants to be heard,” said CFPB Director Richard Cordray. “They are also our compass. They make a difference by informing our work and helping us identify and prioritize problems for potential action.” 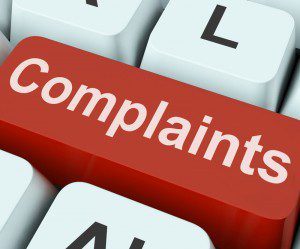 Report reveals the most complained about product is mortgages

The 2013 Consumer Response Annual Report can be found at: http://www.consumerfinance.gov/reports/2013-consumer-response-annual-report/

The Dodd-Frank Wall Street Reform and Consumer Protection Act, which created the CFPB, established the handling of consumer complaints as an integral part of the CFPB’s work. When the Bureau opened its doors on July 21, 2011, it began consumer response operations the same day, accepting consumer complaints about credit cards. Since then, the Bureau has expanded its complaint handling in 2012 to include complaints about mortgages, bank accounts and services, private student loans, vehicle and other consumer loans, and credit reporting. In 2013, it began taking complaints on money transfers, debt collection, and payday loans.

Mortgages: The number one most complained about consumer product was mortgages, accounting for 37 percent of overall complaints. For these approximately 60,000 complaints, consumers were most concerned with problems when they were unable to pay, such as issues relating to loan modifications, collections, or foreclosures.

Foreclosure alternatives: Consumers have received mortgage foreclosure alternatives that help them keep their home;
Protection from debt collectors: After CFPB inquiries, debt collectors have stopped engaging in excessive collection communications with consumers;
Restored lines of credit: Consumers have had their credit lines restored when they wanted, or removed when that was their desired outcome;
Corrections to credit reports: Consumers have had their credit reports cleaned up either by having correct submissions given to credit bureaus or by having credit bureaus correct inaccurate information about their consumer accounts; and
Customer service: Many consumer problems are related to unanswered inquiries or incorrect information. After CFPB involvement, many customers had their formerly unmet customer service issues finally resolved.

The Bureau has also seen monetary relief for consumers in about 7 percent of complaints. This includes:

Information about consumer complaints is available to the public through the CFPB’s public Consumer Complaint Database. A complaint is listed in the database after the company responds to the complaint or after the company has had the complaint for 15 calendar days, whichever comes first. If a company demonstrates within 15 days that it has been wrongly identified, no data for that complaint is posted. The database is updated nightly and includes anonymized complaint information. The database enables the public to see what is being complained about and why; and it enables consumer groups to identify troublesome trends.

Complaints inform the Bureau’s work and help to identify problems, which then feed into the Bureau’s supervision and enforcement prioritization process.

The Bureau will continue to work toward expanding its complaint handling capabilities to include other products and services under its authority, such as prepaid cards.

To submit a complaint, consumers can: