November 22, 2013 – At a field hearing in Boston on Wednesday, November 20, 2013, Richard Cordray of the CFPB took the opportunity to unveil the new “Know Before You Owe” forms, which will replace their better known “good-faith estimate” predecessors.  The final rule issued on Wednesday will require lenders to replace the oft-confusing good faith estimate with the easier-to-use form by August of 2015. 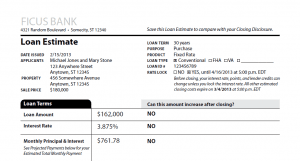 Follow the links below for an early look at sample versions of these forms.

The CFPB explains each form:

The loan estimate: This form will be provided to consumers within three business days after they submit a loan application. It replaces the early Truth in Lending statement and Good Faith Estimate and provides a summary of the key loan terms and estimated loan and closing costs. Consumers can use this form to compare the costs and features of different loans.

The closing disclosure: Consumers will get this form three business days before closing on a loan. It replaces the final Truth in Lending statement and the HUD-1 settlement statement and provides a detailed accounting of the transaction

Compliance actually gets a little simpler this time around, since the industry will no longer have to administer compliance with two different sets of regulatory requirements.  Paperwork is cut in half, meaning long-term savings and less redundant work for the lender.

The two forms are nearly identical in layout, making it much easier to compare information in the estimate and the closing disclosure.  This will make shopping for loans a much simpler process for the consumer, showing up to a 42 percent improvement in comparing loans.  An extensive study showed statistical improvement of 29 percent in participants who used the new forms being better prepared to ask questions about a sample loan.  Specifically, consumers were better able to identify:

While many of the CFPB’s final rules have been met with a decidedly mixed reception, this looks to be an improvement for both mortgage lenders and consumers.  Keep checking back from more compliance news from OnlineEd.